The Euroa Community Cinema is Strathbogie Shire Council-managed and is overseen by an operating committee made up of council staff and local volunteers. A group of dedicated community members volunteer their time to screen movies as projectionists and operating the kiosk and ticket box.

Note: children under 13 must be accompanied by a parent or guardian who is at least 16 years or older.

Screenings are held regularly on Saturdays at 8pm and Sundays at 4pm, unless otherwise stated. There are additional special screenings during the school holidays and on the first Friday of the month.

Tickets can be purchased online or in person from the cinema, unless otherwise stated. 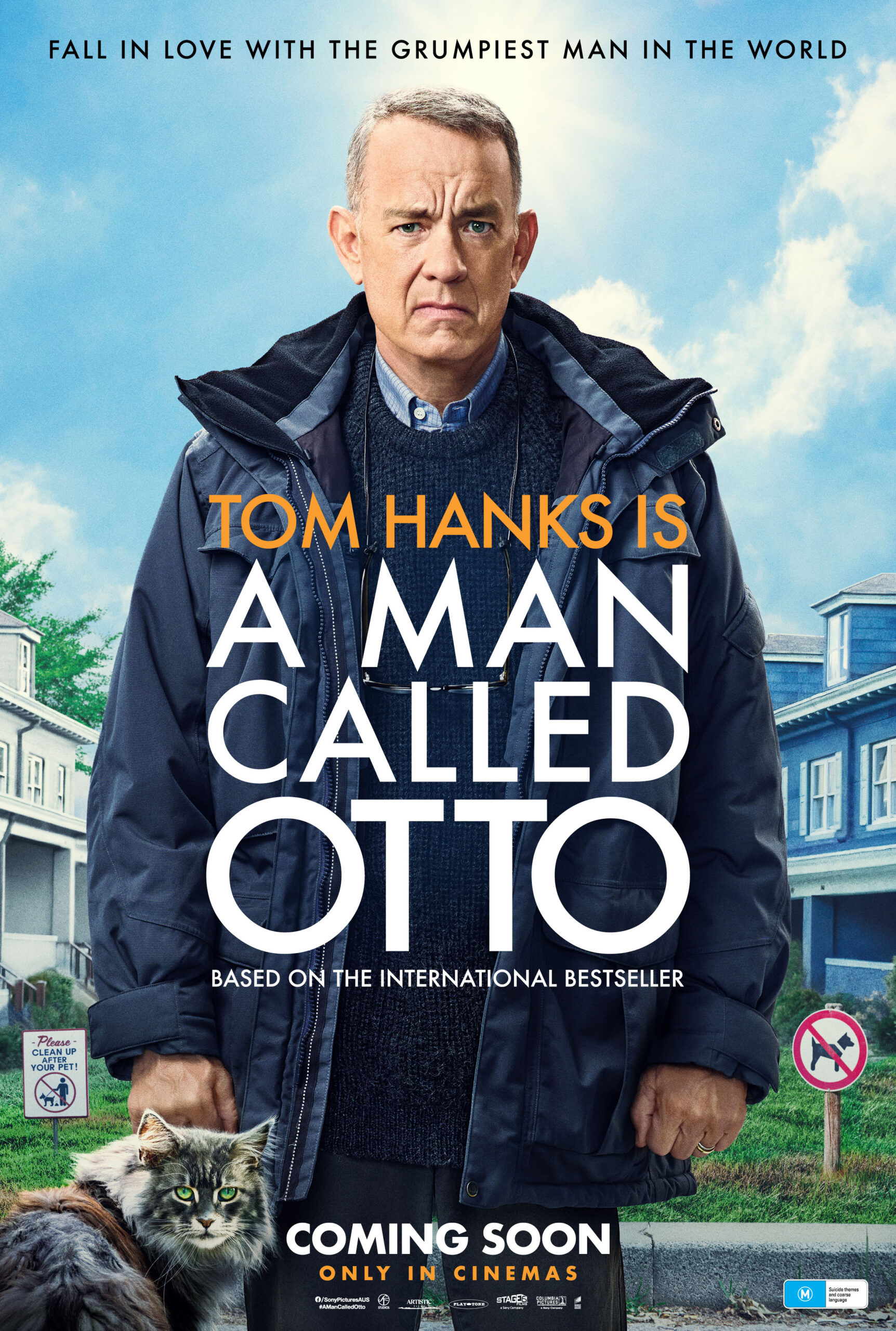 Based on the comical and moving # 1 New York Times bestseller, A Man Called Otto tells the story of Otto Anderson (Tom Hanks), a grumpy widower who is very set in his ways. When a lively young family moves in next door, he meets his match in quick-witted and very pregnant Marisol, leading to an unlikely friendship that will turn his world upside-down.

Experience a funny, heart-warming story about how some families come from the most unexpected places. 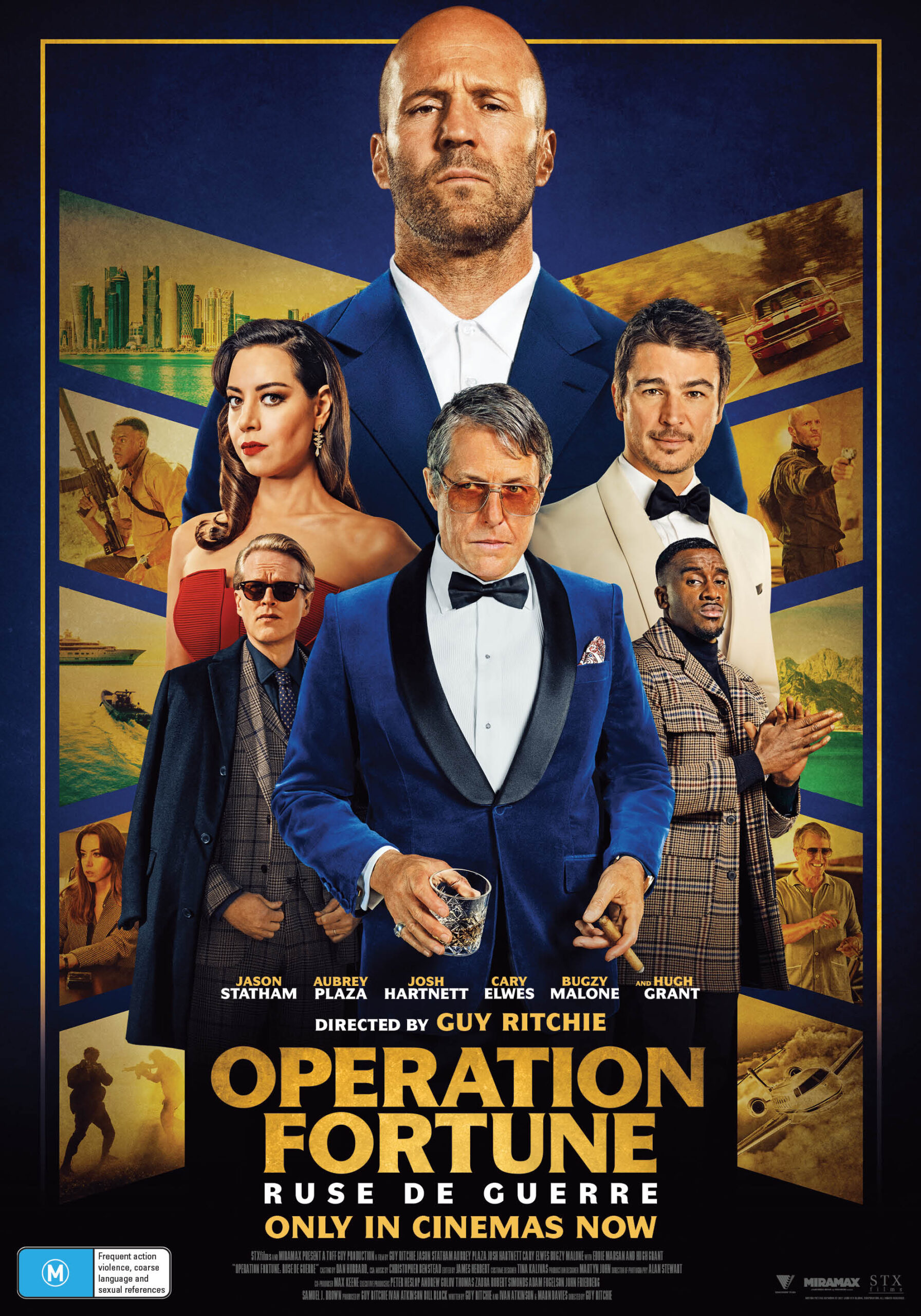 In the film, super spy Orson Fortune (Jason Statham) must track down and stop the sale of a deadly new weapons technology wielded by billionaire arms broker Greg Simmonds (Hugh Grant). Reluctantly teamed with some of the world’s best operatives (Aubrey Plaza, Cary Elwes, Bugzy Malone), Fortune and his crew recruit Hollywood’s biggest movie star Danny Francesco (Josh Hartnett) to help them on their globe-trotting undercover mission to save the world.

Whitney Houston: I Wanna Dance with Somebody  – Community Choice movie 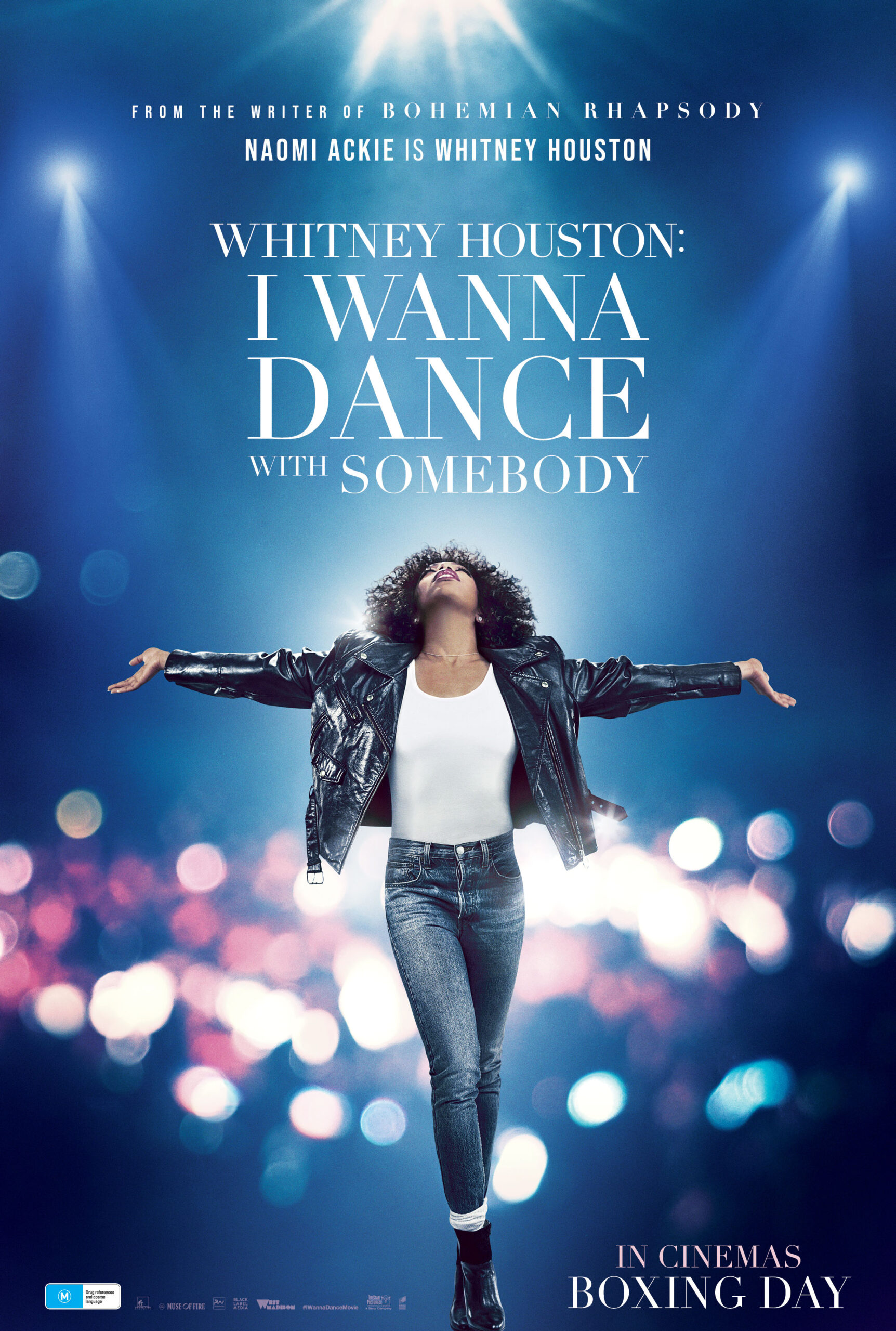 I Wanna Dance with Somebody is a powerful and triumphant celebration of the incomparable Whitney Houston. Directed by Kasi Lemmons, written by Academy Award® nominee Anthony McCarten, produced by legendary music executive Clive Davis and starring BAFTA Award® winner Naomi Ackie, the film is a no-holds-barred portrait of the complex and multifaceted woman behind The Voice. From New Jersey choir girl to one of the best-selling and most awarded recording artists of all time, audiences are taken on an inspirational, poignant—and so emotional—journey through Houston’s trailblazing life and career, with show-stopping performances and a soundtrack of the icon’s most beloved hits as you’ve never heard them before. Don’t you wanna dance?

Corsage [M] – Subtitled (to be confirmed) 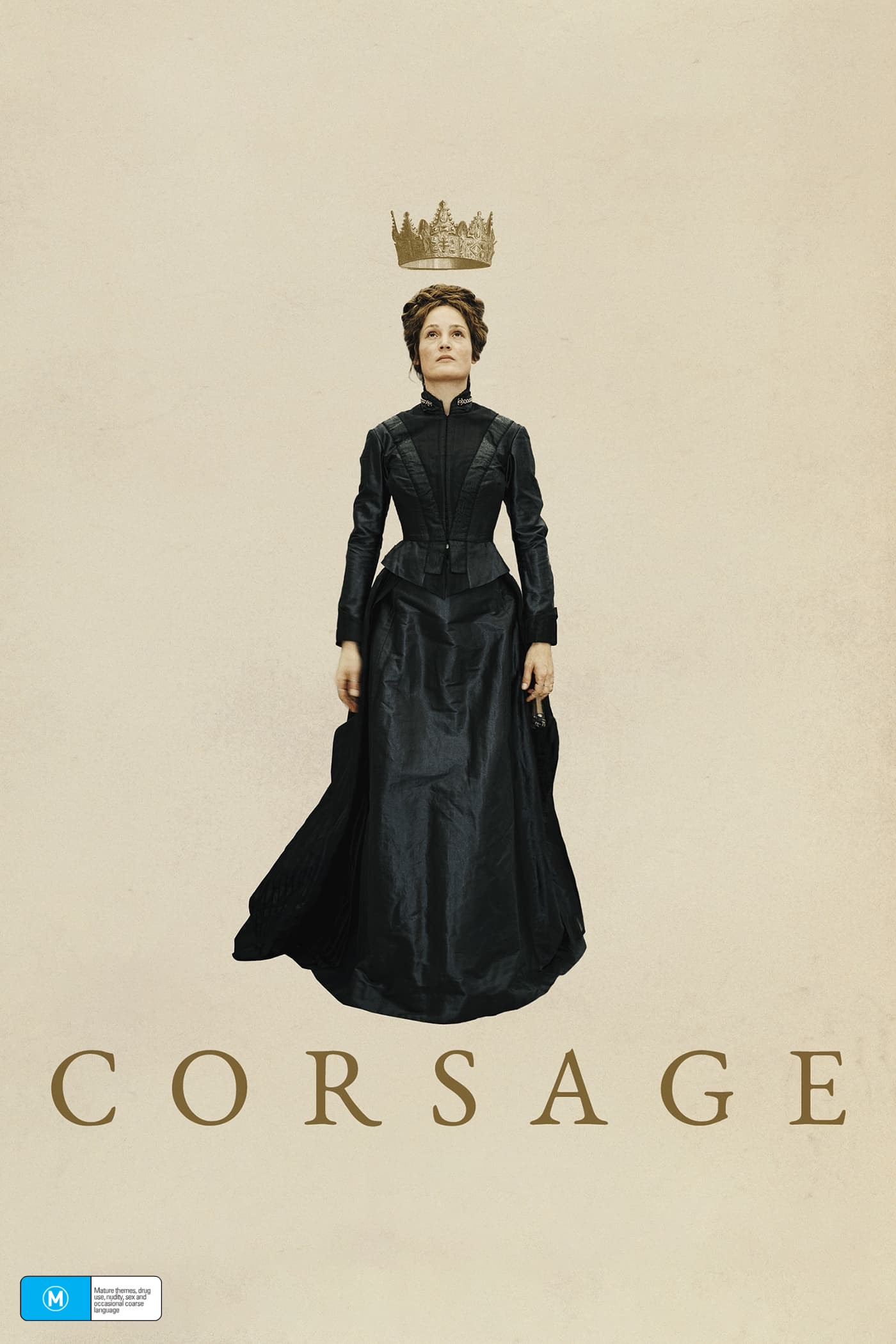 As her 40th birthday approaches, beautiful Empress Elisabeth of Austria is thrown into turmoil as she anticipates being considered an old woman. 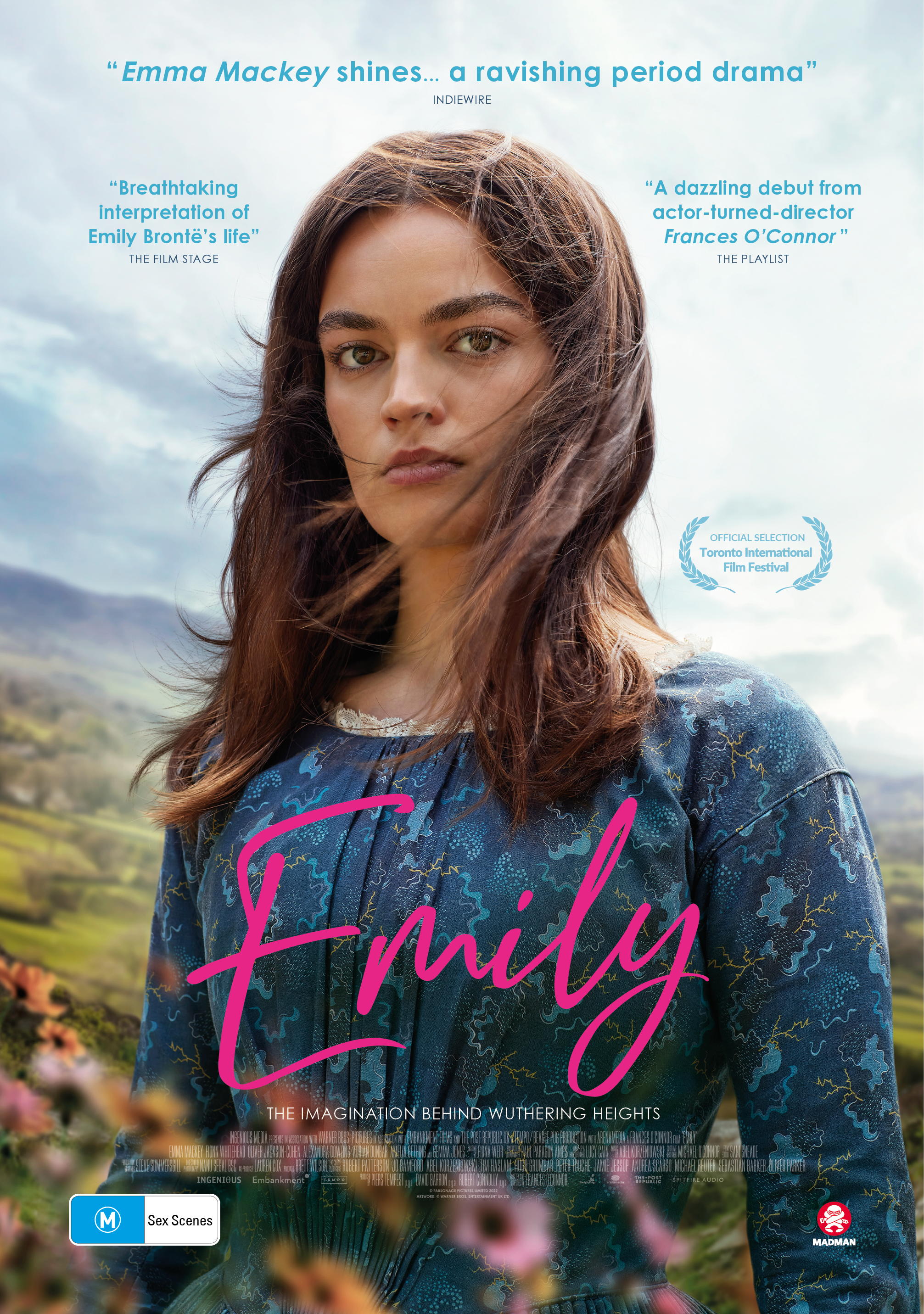 Synopsis: EMILY tells the imagined life of one of the world’s most famous authors, Emily Brontë. The film stars Emma Mackey (Sex Education, Death on the Nile) as Emily, a rebel and misfit, as she finds her voice and writes the literary classic ‘Wuthering Heights’. EMILY explores the relationships that inspired her – her raw, passionate sisterhood with Charlotte (Alexandra Dowling – The Musketeers) and Anne (Amelia Gething – The Spanish Princess); her first aching, forbidden love for Weightman (Oliver Jackson-Cohen – The Lost Daughter, The Haunting of Bly Manor) and her care for her maverick brother Branwell (Fionn Whitehead – The Duke, Dunkirk), whom she idolises. 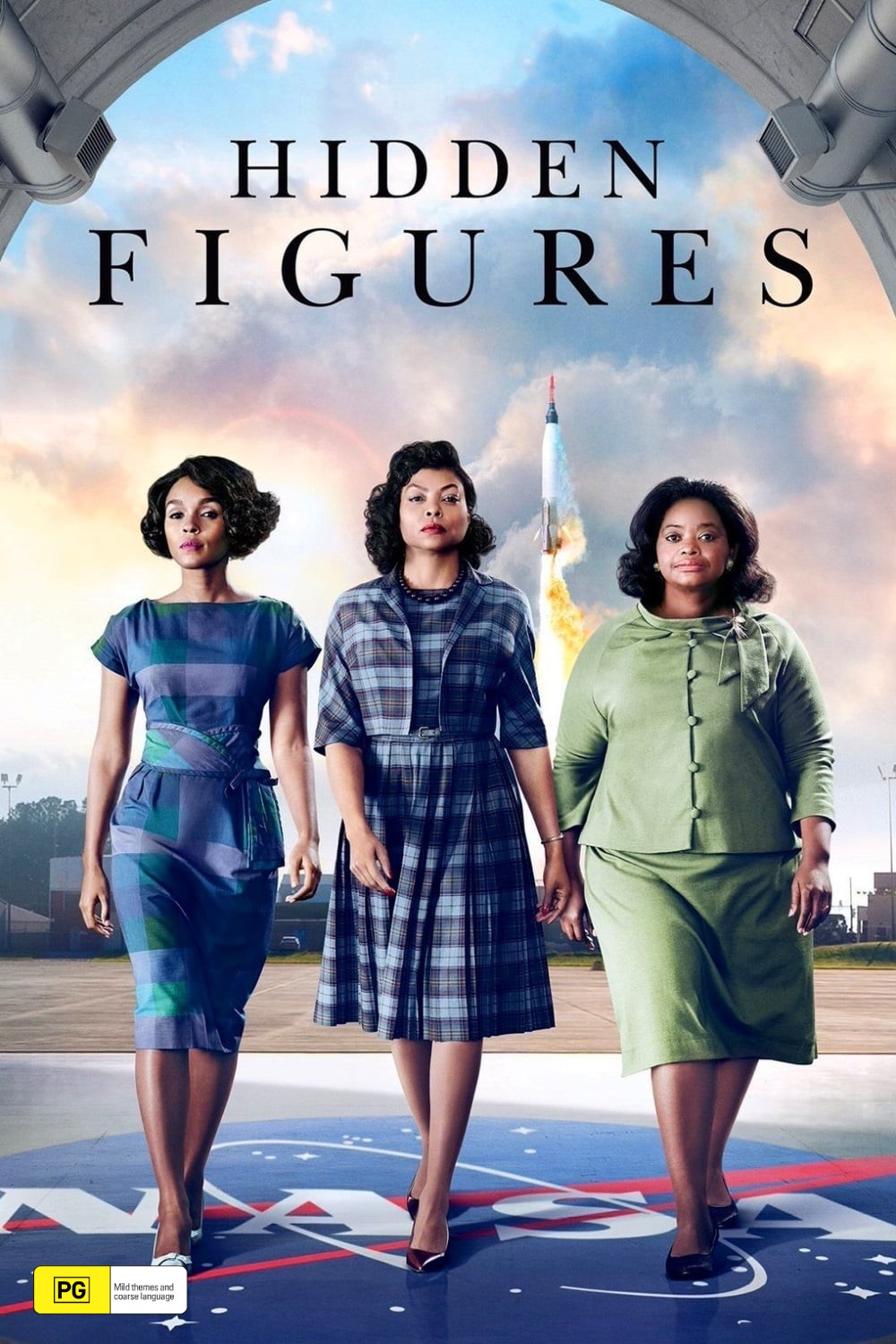 Synopsis: HIDDEN FIGURES is the incredible untold story of Katherine Johnson (Taraji P. Henson), Dorothy Vaughn (Octavia Spencer) and Mary Jackson (Janelle Monae) – brilliant women working at NASA, who served as the brains behind one of the greatest operations in History: the launch of astronaut John Glenn into orbit, a stunning achievement that restored the nation’s confidence, turned around the Space Race, and galvanised the world. The visionary trio crossed all gender and race lines to inspire generations to dream big. 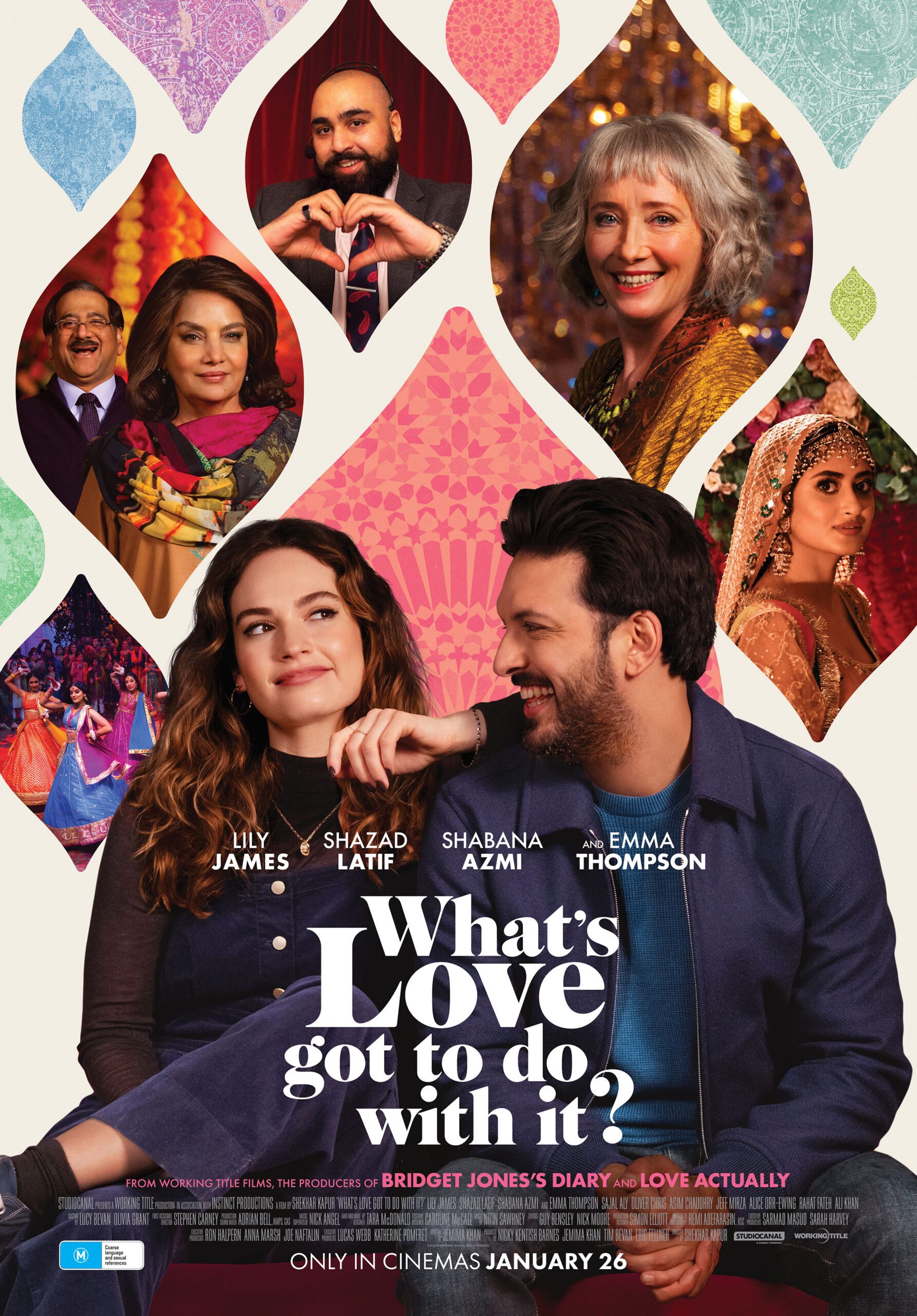 Synopsis: How do you find lasting love in today’s world? For documentary filmmaker Zoe (Lily James), swiping right to find Mr Right has only delivered bad dates and funny anecdotes, much to her opinionated mother Cath’s (Emma Thompson) dismay. For her childhood friend and neighbour Kazim (Shazad Latif), the answer is to follow his parents’ example and opt for an assisted marriage with a bright and beautiful bride from Pakistan. As Zoe films his hopeful journey from London to Lahore to marry a stranger, chosen by his parents, she begins to wonder if she might have something to learn from a different approach to finding love.

The Banshees of Inisherin [M] 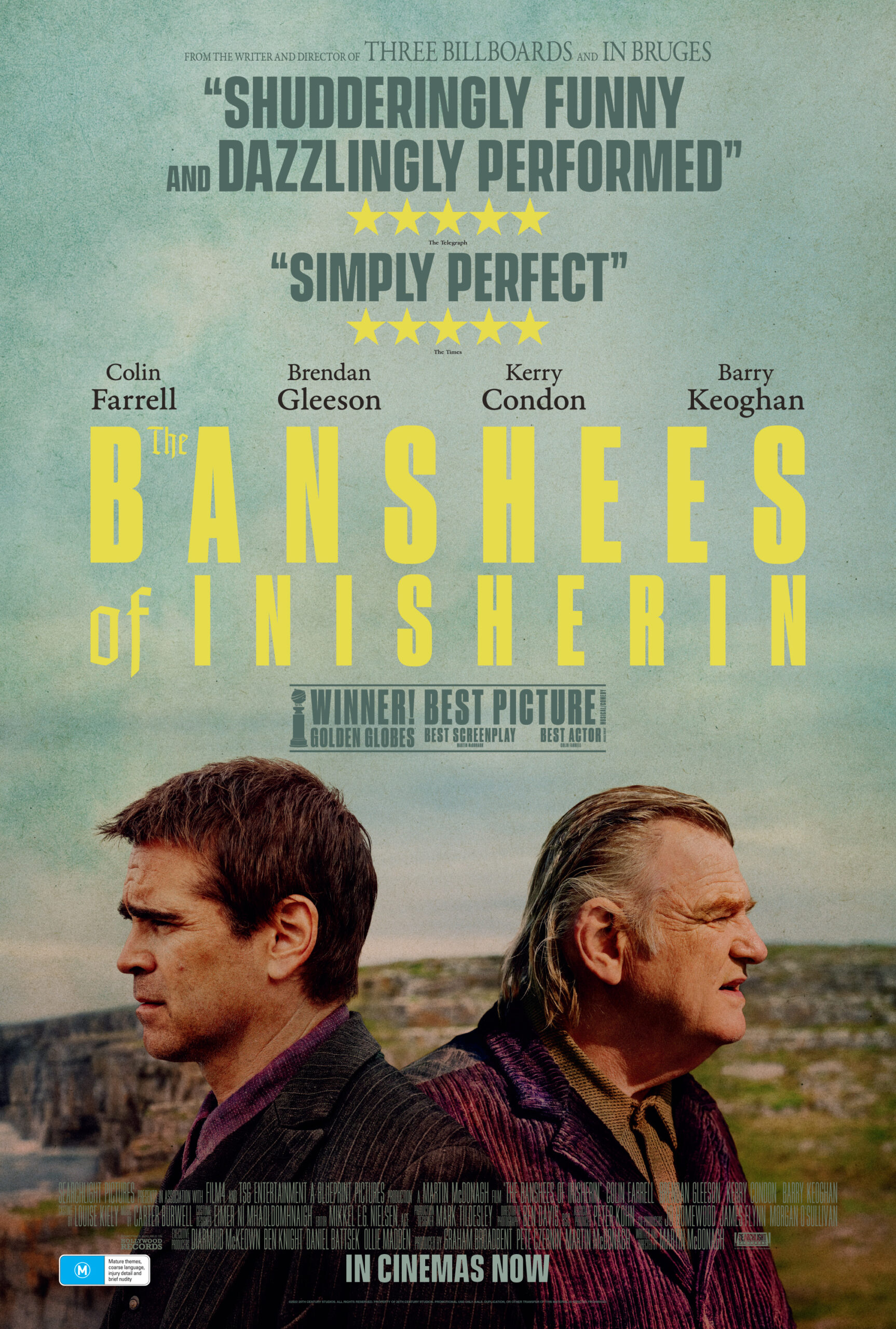 Synopsis: Set on a remote island off the west coast of Ireland, The Banshees of Inisherin follows lifelong friends Padraic (Colin Farrell) and Colm (Brendan Gleeson), who find themselves at an impasse when Colm unexpectedly puts an end to their friendship. A stunned Padraic, aided by his sister Siobhan (Kerry Condon) and troubled young islander Dominic (Barry Keoghan), endeavours to repair the relationship, refusing to take no for an answer. But Padraic’s repeated efforts only strengthen his former friend’s resolve and when Colm delivers a desperate ultimatum, events swiftly escalate, with shocking consequences. 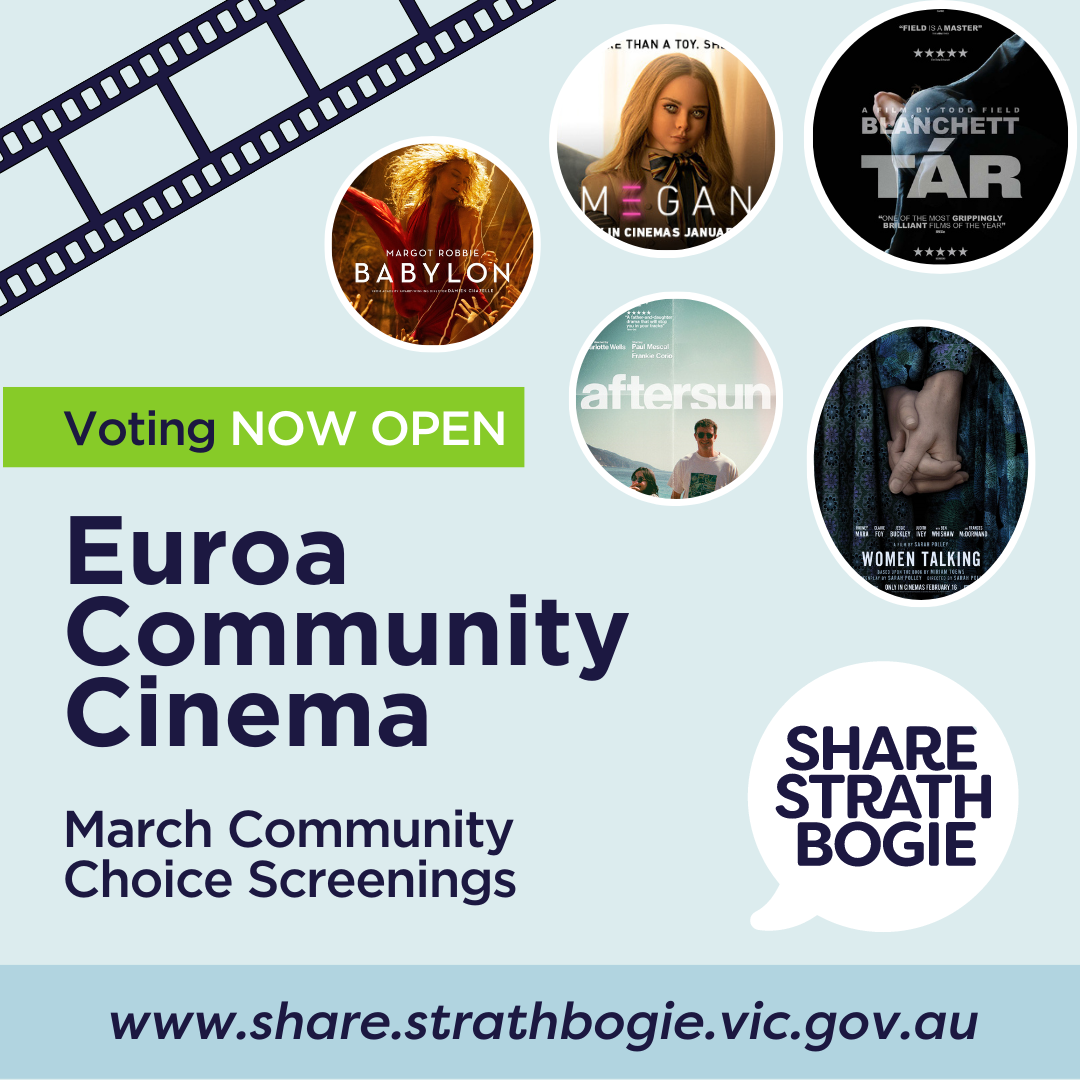 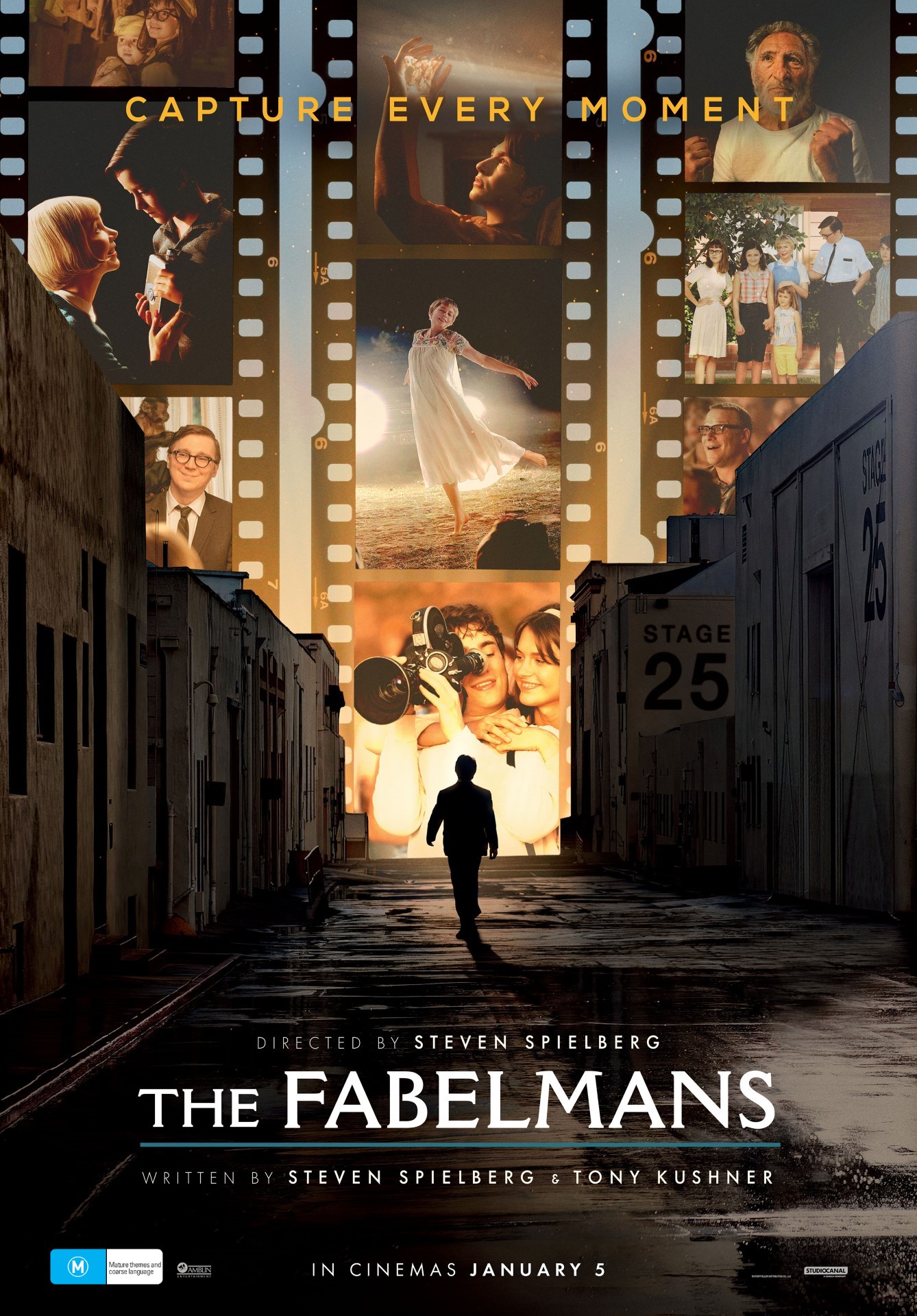 Synopsis: A semi-autobiography based on Steven Spielberg’s own childhood. 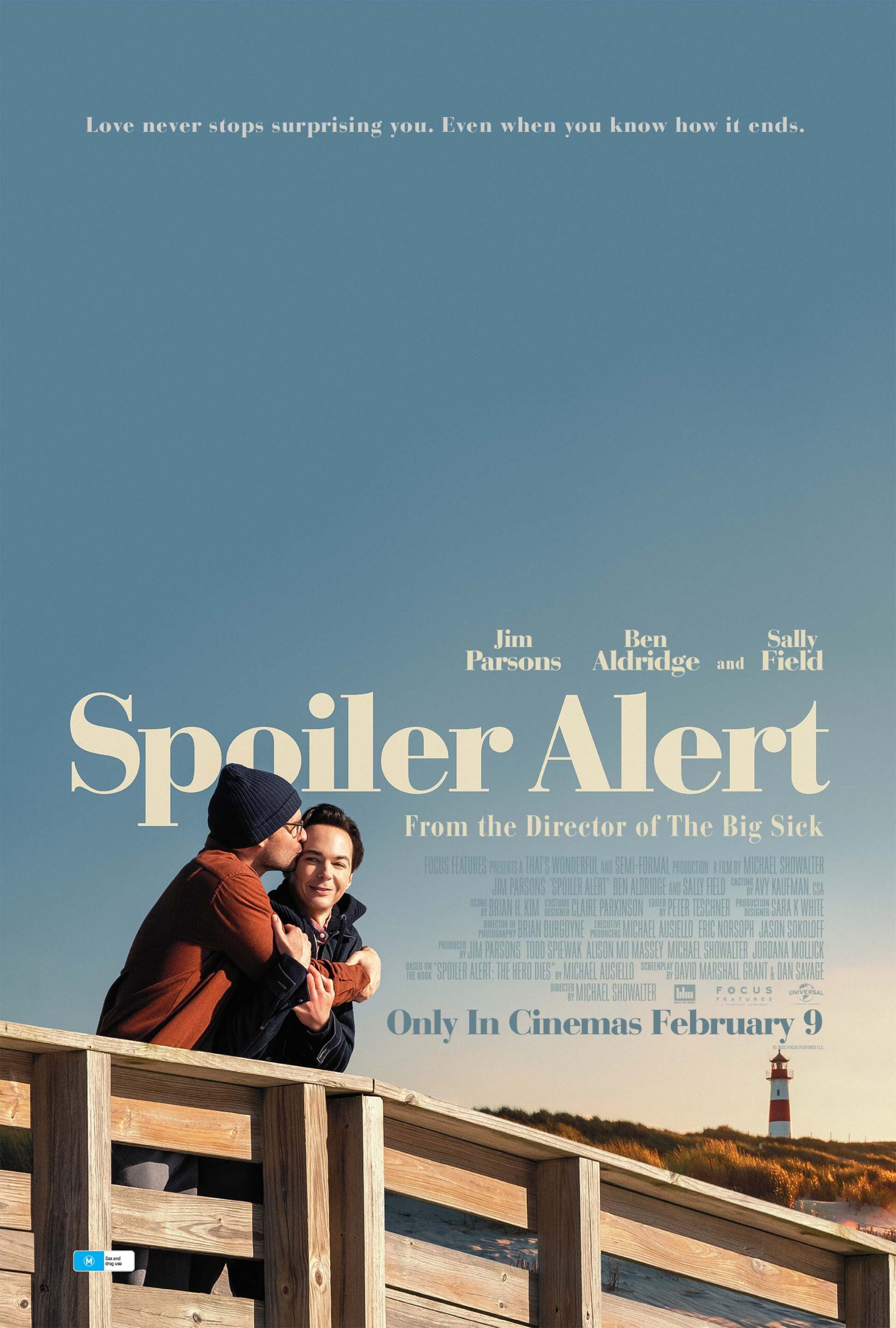 Based on Michael Ausiello’s best-selling memoir “Spoiler Alert: The Hero Dies,” the film is a heartwarming, funny and life-affirming story of how Michael and Kit’s relationship is transformed and deepened when one of them falls ill.

The Amazing Maurice [PG] – $5 School holiday movie (to be confirmed) 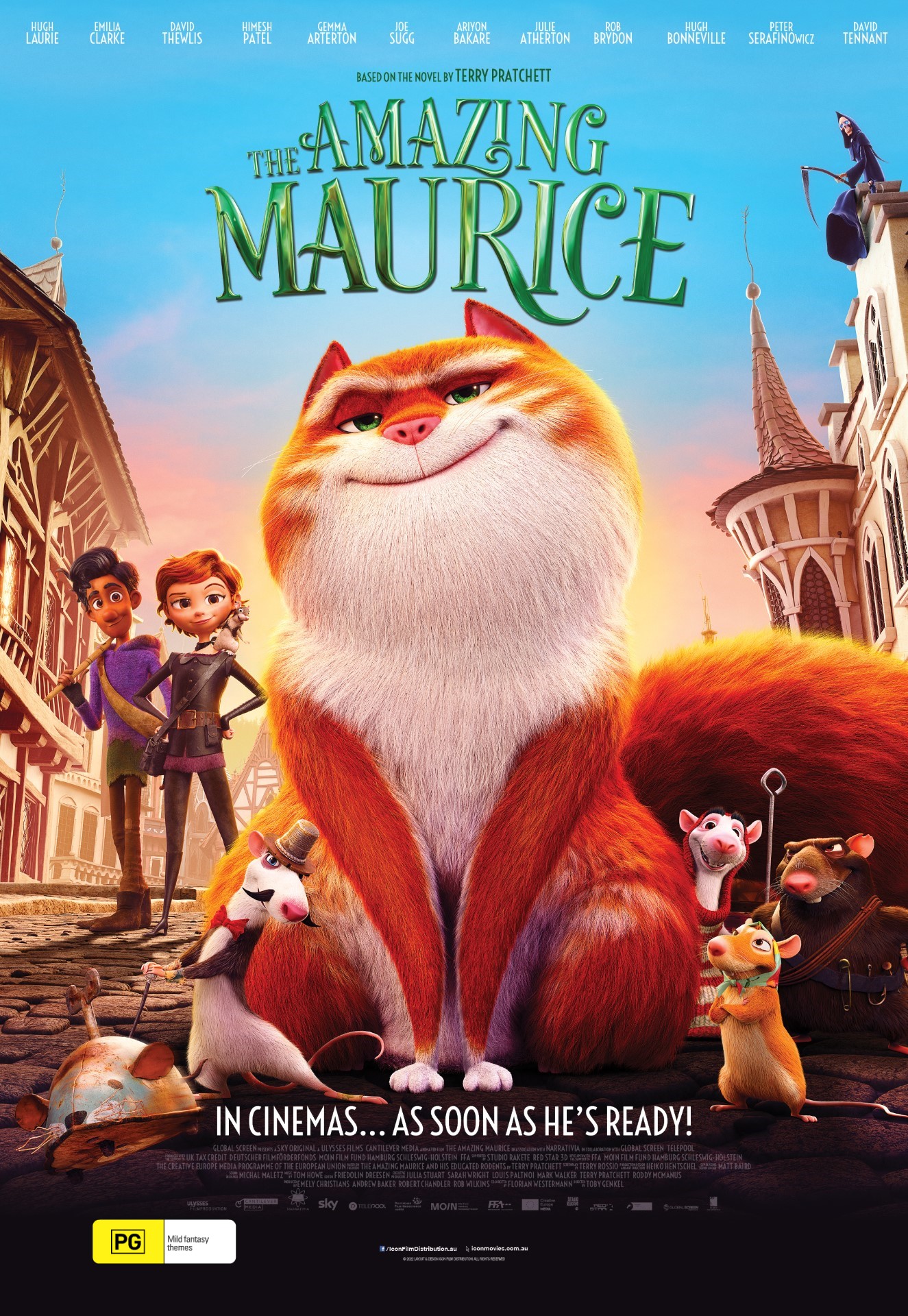 From the legendary Terry Pratchett comes a furry tale with a whiff of intrigue.

Rats! They’re everywhere… In the breadbins, dancing across the tabletops, stealing pies from under the cook’s noses. So, what does every town need? A good piper to lure them away.
That’s where Maurice, a streetwise tomcat with the perfect money-making scam, comes in. Everyone has heard of the stories about the pied piper and the town full of rodents. So, Maurice has found his very own pied piper and a plague of rats to trick gullible townsfolk into giving him lots of cash.
All is going well until they arrive in the far-flung village of Bad Blintz where they meet a book obsessed girl called Malicia, who enlists their help to solve the mystery of her town … 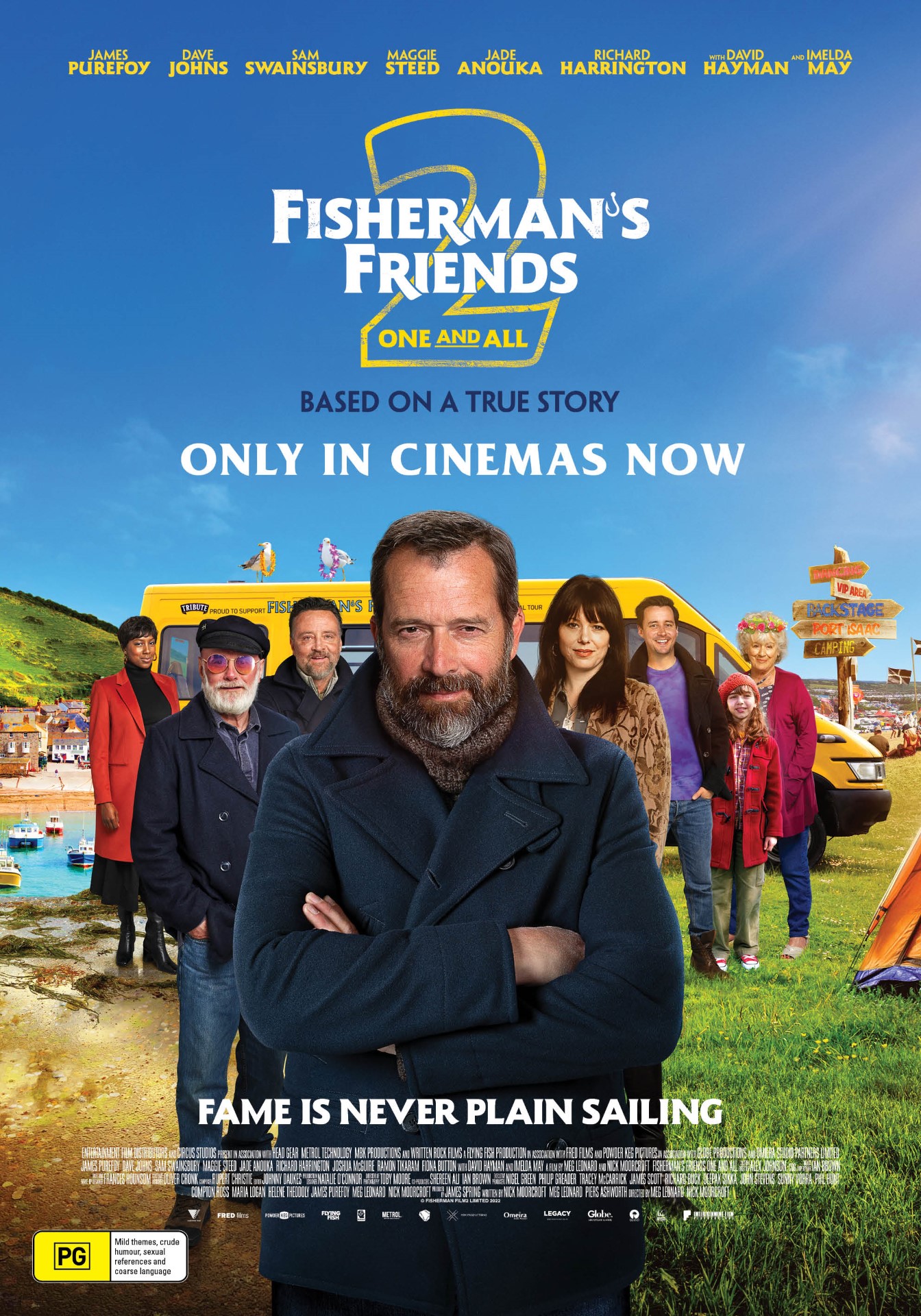 The sequel to the 2019 hit UK comedy charts the next instalment of the Fisherman’s Friends amazing and uplifting true story. Following the unexpected success of their debut album “No Hopers, Jokers and Rogues” we re-join the world’s oldest ‘buoy band’ a year later struggling to navigate the pressures, pitfalls and temptations of their newfound fame. FISHERMAN’S FRIENDS 2 follows the celebrated shanty singers through the highs and lows as lifelong friendships are put to the test, the community is struck by the ‘curse of the second album’ and ultimately the band realise their dream by performing on the pyramid stage at Glastonbury. 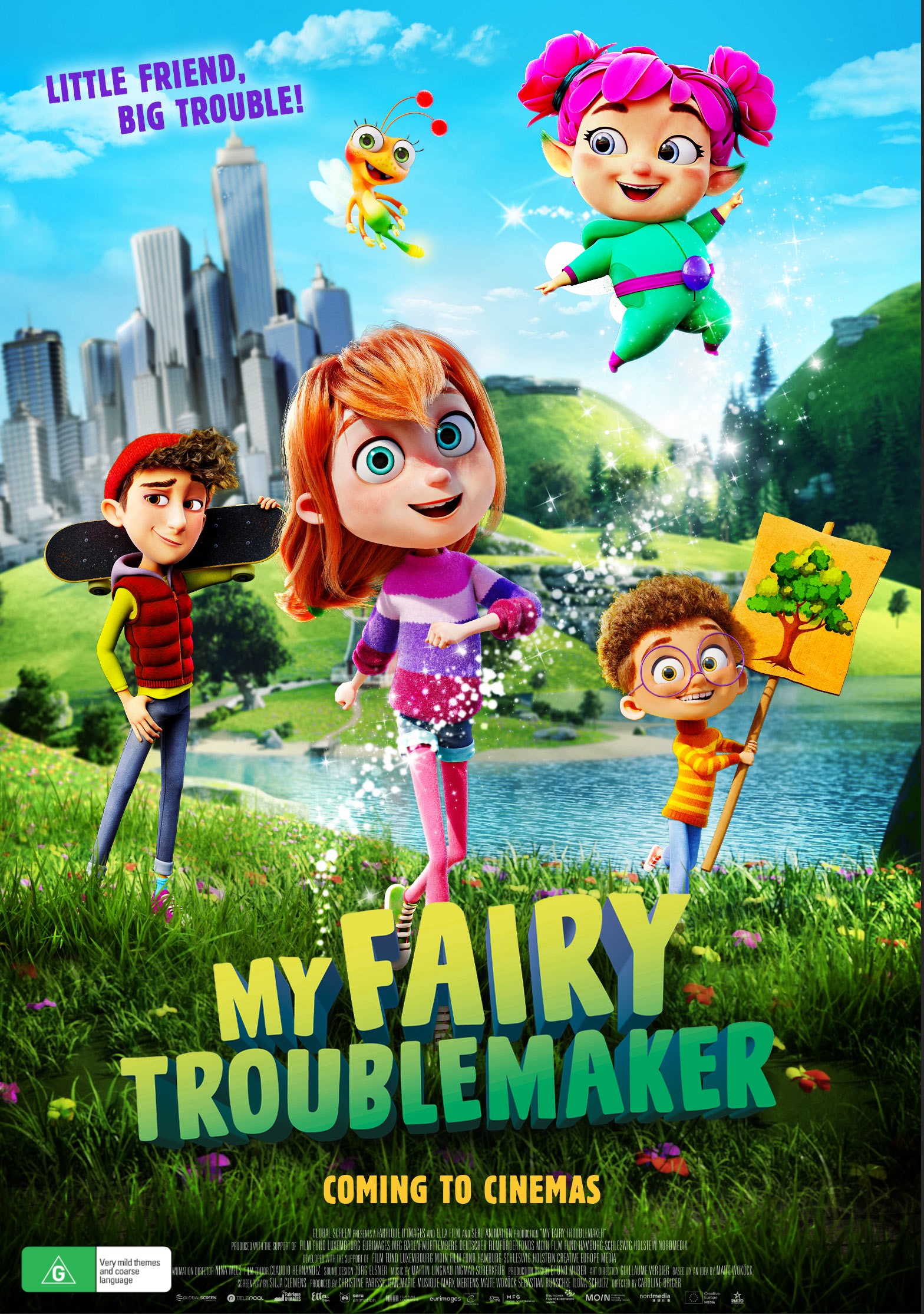 Violetta, a cheeky fairy, gets lost in the human world. To find her way back to the fairy world, she teams up with the human girl Maxie and discovers her true destiny. 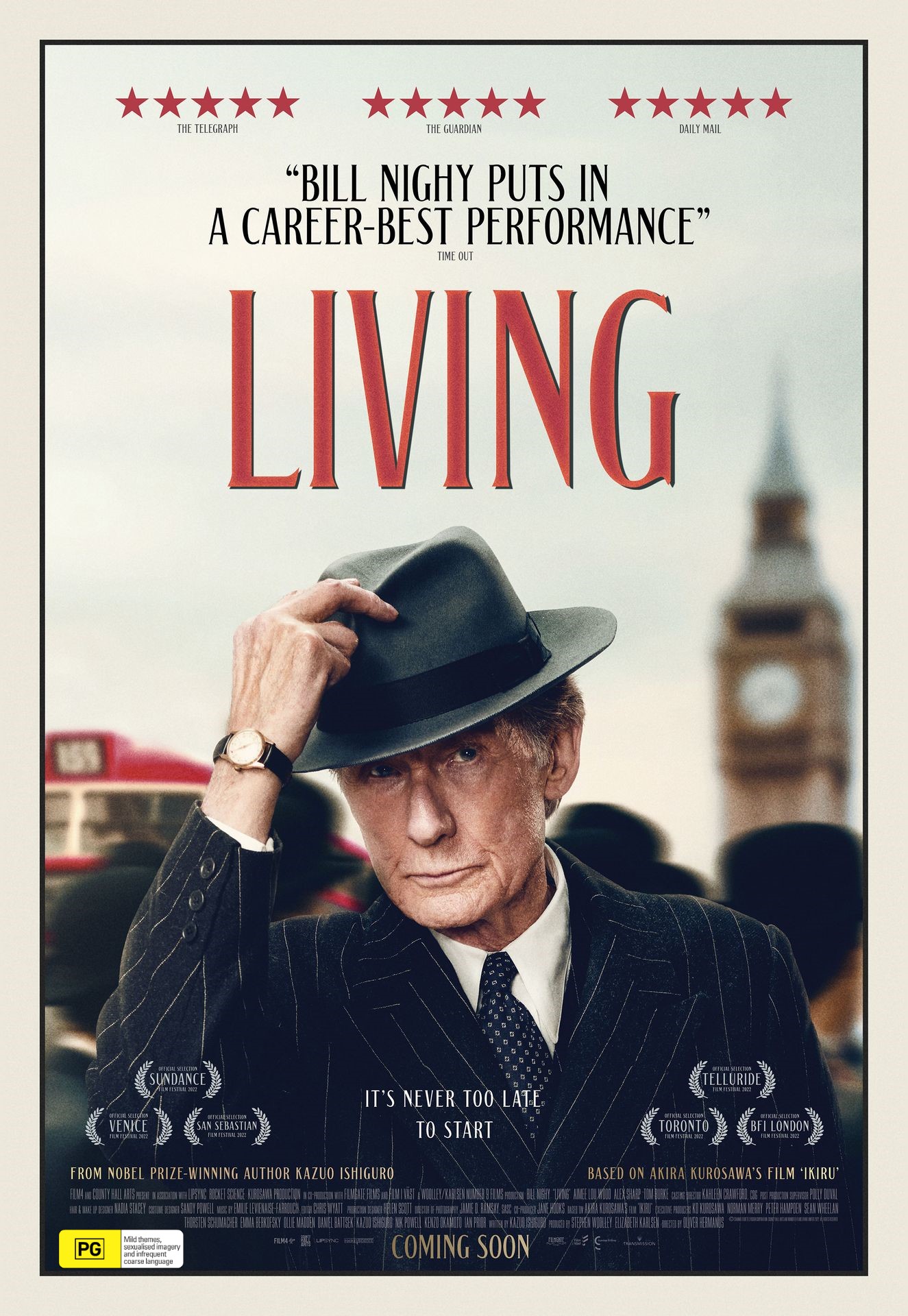 LIVING is the story of an ordinary man, reduced by years of oppressive office routine to a shadow existence, who at the eleventh hour makes a supreme effort to turn his dull life into something wonderful – into one he can say has been lived to the full. 1953. A London shattered by WWII is still recovering. Williams (Bill Nighy), a veteran civil servant, is an important cog within the city’s bureaucracy as it struggles to rebuild. Buried under paperwork at the office, lonely at home, his life has long felt empty and meaningless. Then a shattering medical diagnosis forces him to take stock – and to try and grasp fulfilment before it goes beyond reach. At a seaside resort, chaperoned by a local decadent (Tom Burke), he flirts with hedonism before rejecting it as his solution. Back in London he finds himself drawn to the natural vitality of Margaret (Aimee Lou Wood), a young woman who once worked under his supervision and is now determined to spread her wings. Then one evening he is struck by a revelation – one as simple as it is profound – and with a new energy, and the help of Peter (Alex Sharp), an idealistic new recruit to his department, he sets about creating a legacy for the next generation.

Pre-paid cinema tickets can be purchased from Council’s Euroa offices at 109 Binney St, Euroa from 9am to 5pm, Monday to Friday.

The Euroa Community Cinema Kiosk is run by our dedicated volunteers. The kiosk is fully stocked with drinks, lollies, popcorn, and ice creams.

The cinema can be hired by members of the public and community groups to host a wide variety of events such as fundraisers, forums or concerts. If you are interested in hiring the cinema, please view the cinema hire form for details or contact our Customer Service Team on 1800 065 993.

The Euroa Community Cinema staff and volunteers strive to meet your accessibility needs. Please speak with the volunteers at the screenings for assistance, or alternatively you may call the Council’s Customer Service Team before attending a screening on 1800 065 993.

A hearing loop is available for patrons with hearing aids – please advise the volunteers if you require this on your arrival. A social story has also been developed that can be altered as required for your visit to the cinema. Social stories are used for preparing people for situations before they happen. If you have any other feedback regarding accessibility at the Euroa Community Cinema, please contact the Council so improvements can be made.

Strathbogie Shire Council is always on the lookout for cinema enthusiasts to join our team of volunteers. There are a variety of jobs currently undertaken by volunteers to keep the cinema running, such as selling tickets, projection and working in the kiosk. As one of our valued volunteers, you will of course get to view the movie screening free of charge. If you are interested in volunteering, contact our Customer Service Team on 1800 065 993 or click here to find our application form.

Council received State Government funding from the Regional Arts Infrastructure Allocation – Regional Cinemas Program to upgrade the hall. The total cost of the project was approximately $80,000 which was co-funded by Council and the government on a dollar-for-dollar basis. After a lot of hard work by community members and Council staff, the Euroa Community Cinema was opened in November 2003.

Initially films were shown once every month, however screenings increased after sufficient demand. The cinema has now transitioned to a digital format and screens movies Saturday evenings and Sunday afternoons, with additional screenings throughout the year.